After 40 entries and nearly 2,500 votes, you chose the winners of our 2017 Kitchen & Bath Designer Contest. Here we showcase these professionals and their stellar projects. 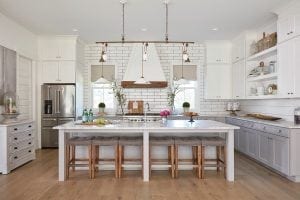 Kristen Yonson and Jessica McRae are the co-founders of popular interior design site SwatchPop! The online platform offers help for your decorating dilemmas by pairing you with a professional designer once you’ve completed a personal style questionnaire. Yonson took time off from running her business to design her own kitchen recently. “My inspiration was mostly to create a space to entertain,” she explains.

The room’s focus was the large island―perfect for seating big groups of guests. But things don’t always go as planned, even for a seasoned designer. She says she’d found the ideal slab of marble for the countertop. However, when it was time for installation, she was devastated to learn that the slab had broken in half, forcing her to go with a different choice in order not to delay construction of her Milton home.

She asserts that a designer always has to stay flexible―“I moved ahead with a slab that had irregular, odd veining because it was the only one I could find. But now that slab is my favorite part of the kitchen! It was meant to be!” she laughs. 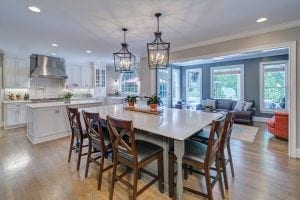 Design Manager Sarah Jordan curated this Nesbit Downs kitchen remodel for a family that wanted space for entertaining. Jordan’s vision combined the keeping room with the kitchen, which allowed more room for a large island with seating. Her client wanted a bright, but cozy, feel in the cookhouse.

“The cabinets’ white color achieved the brightness and adding the contrast of dark gray in the island and a touch of pale green in the tile gave it a fresh, yet warm feel.” Her favorite part of the design? “The existing kitchen window wasn’t showcased to its fullest potential,” she says.

“So I used a crackled porcelain subway tile framing the window all the way to the ceiling, added new sconces, and combined it all with a new farmhouse sink. Now it’s the focal point of the kitchen!” 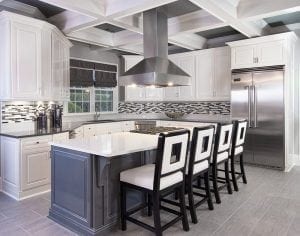 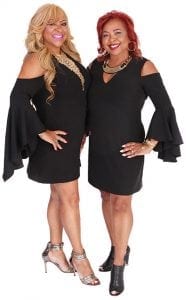 Sisters Barbara Elliott and Jennifer Ward-Woods are the co-owners of Decorating Den Interiors, a million dollar design firm. Elliott transformed this Johns Creek kitchen from dull to dynamic. “We opened up the floor plan between the family room and kitchen. This allowed us to enlarge the island and add a bar space,” says Elliott, the project’s lead designer. Once the layout was done, the team got to work with the design details. “Our color palette was gray, white and silver. We chose gray floor tile and the backsplash combines white glass tiles and a mosaic of silver, metal and mirror.”

For a quirky touch, they added orange velvet chairs in a seating area flanking the inviting fireplace. “The light fixtures and the coffered ceiling add drama and help connect the two areas.” 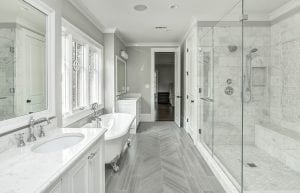 This vintage-inspired master bathroom was created for a family rebuilding their home in the Virginia-Highland area. Interior Designer Jenny Warner used nods to the original materials of the home―a key to the success of the design.

“Elements like the clawfoot tub, plumbing fixtures, and detailed casement windows with mullions all give a traditional feel that the neighborhood is known for.” She explains that the long space in the room “begged to have some type of pattern in the floor. I’m really proud of how it turned out and the way it draws the space together and shows off that tub!”

She says that the hexagon-shaped marble tiles that she chose for the shower floor is a style that would have been used in that neighborhood originally around 1918. She says of the installation process, “It took some drawings and onsite direction to get the precise layout that worked best for the space.

That poor tile guy putting up with my exacting demands for this floor was totally worth it!” 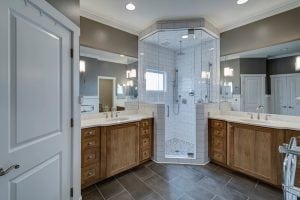 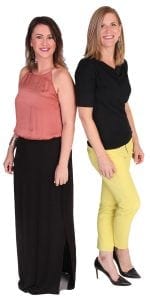 Owner/Designer Marni Ratner of Studio M Interiors along with Jennifer Davis brought this Midtown home’s bathroom, built in 1922, into the 21st century. “We wanted to provide beautiful yet functional updates without going too contemporary since many historical elements of the house remained untouched.

Using iconic subway tiles and dark grout as the shower’s focal point, we were able to mix in modern fixtures and finishes to create a timeless, balanced blend. Originally, this bathroom only had two pedestal sinks, a clawfoot tub, a cave-like shower and one water closet. It was quite cramped.

Although its footprint was relatively small, we were able to create two separate vanities, a spacious, bright corner shower and two water closets―which the owners jokingly referred to as the ‘marriage saver’ bathrooms! The overall result had much more storage and a more spacious feeling,” says Davis, lead designer. 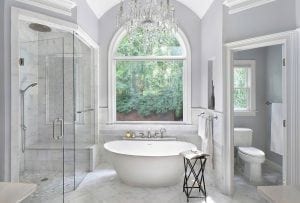 In a world obsessed with what is new and what is next, Bekel Home + Design’s Co-owner and Designer, Beth Johnson, has a simple piece of advice―stay classic and neutral. “Trends come and go so try to do something timeless,” she says.

A gray and white color palette seen throughout the Carrara marble and mosaic accent wall make a bold statement. Plus, the hues keep this 250-square-foot spa in style. The Milton couple wanted to think of the future, not only when it came to design, but also function.

“We aren’t getting younger,” said homeowners Mike and Carolyn McAlpin, when commenting on why they went with a stylish curbless shower entry.

This remarkable Brookhaven kitchen remodel manages to perfectly marry the cool, crisp lines of modern industrial design with the warmth of wood details. The effect is not only eye-catching, but inviting as well. The designers felt that the use of multiple textures and colors and the interplay of cabinet heights and depths would bring their vision to life. The designer wisely showcased the industrial-style trusses in the ceiling by repeating its color and pattern in the hardwood floor below. “The color gray was for a sense of calm, the wood and glass were for variety and red accents for vivacity,” says marketing assistant, Debra Bobo.

THESE CONTESTANTS FOLLOWED CLOSELY WITH THE VOTES