Meet These Amazing Women in Remodeling and See Their Projects 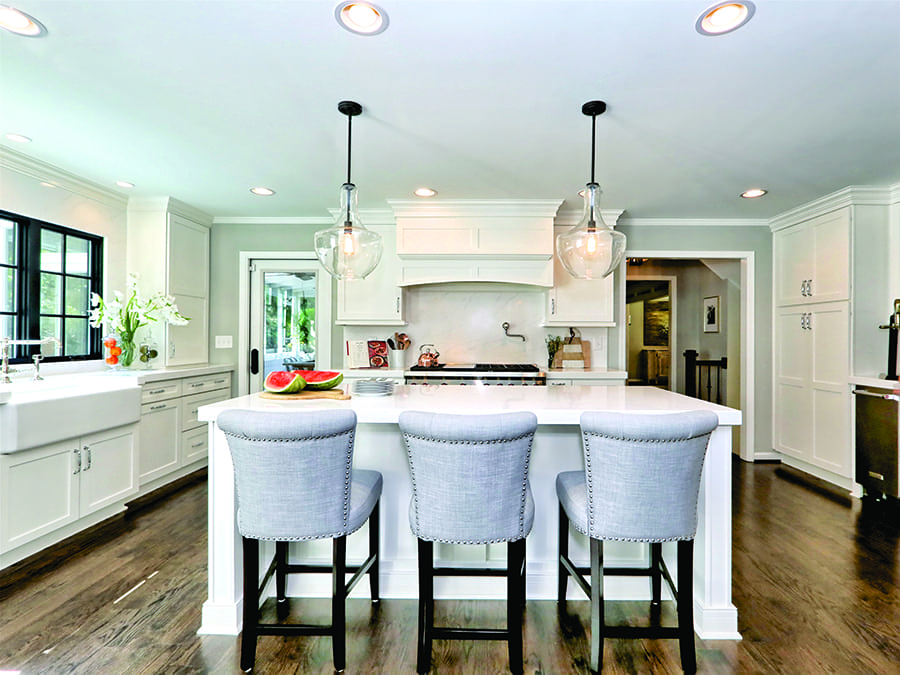 These tenacious leaders prove they have what it takes to succeed in the world of remodeling, construction, and design.

The field of construction isn’t a boys’ club anymore. According to the Bureau of Labor Statistics’ 2017 Population Survey, nine percent of those employed in construction are women. From flaunting stereotypes to breaking through barriers, here, six of Atlanta’s home improvement trailblazers talk about what it’s like to work in the industry and what they see as the future of diversity in that arena.

Laura Bean Tenuto, the daughter in the mother-daughter duo at 5th Generation Contracting, Inc., talks about her favorite slogan—the Nike brand’s iconic tagline “Just Do It.” “That slogan sums it up for me,” she explains. “It reminds me to stay competitive in my career.” After she graduated from college and with several years in sales, she decided to “just do it” and join her mother’s contracting business. “It’s been challenging, but also extremely rewarding.”

Melissa and Laura work closely together on remodeling projects, like this stunning kitchen remodel in East Cobb. “The challenge was that our client wanted a place to entertain large groups, but also an environment where she could cook with her kids,” Melissa says.

Melissa Bean says of working with her daughter, “Laura’s a very independent, strong businesswoman. She recognized that we needed a design manager to hold clients’ hands through the remodeling process. She developed the role and she’s knocking it out of the park.

Clients value her opinion—she’s capable and they know it.” Melissa is no stranger to “just doing it” either. Construction is a field she is intimately familiar with, as she’s the fifth generation in a family of contractors. “I love construction and wanted my own company.

I felt I could do so much better than what I was seeing in the industry,” she remembers. “In the early years, there were crews who didn’t want to work with a woman. I thought that’s OK—they can go work for someone else. And a lot of times, if men came into our office, they’d pass right by me and look for a man to talk to.” But, Melissa says that she considers her gender advantage in her business.

She points out that, often, women are alone in their homes with a construction crew during a remodeling project. “My clients know that this is a woman-owned company—men who work here have a female boss and, obviously, they will listen to women and be respectful.” 5thgenerationcontracting.com 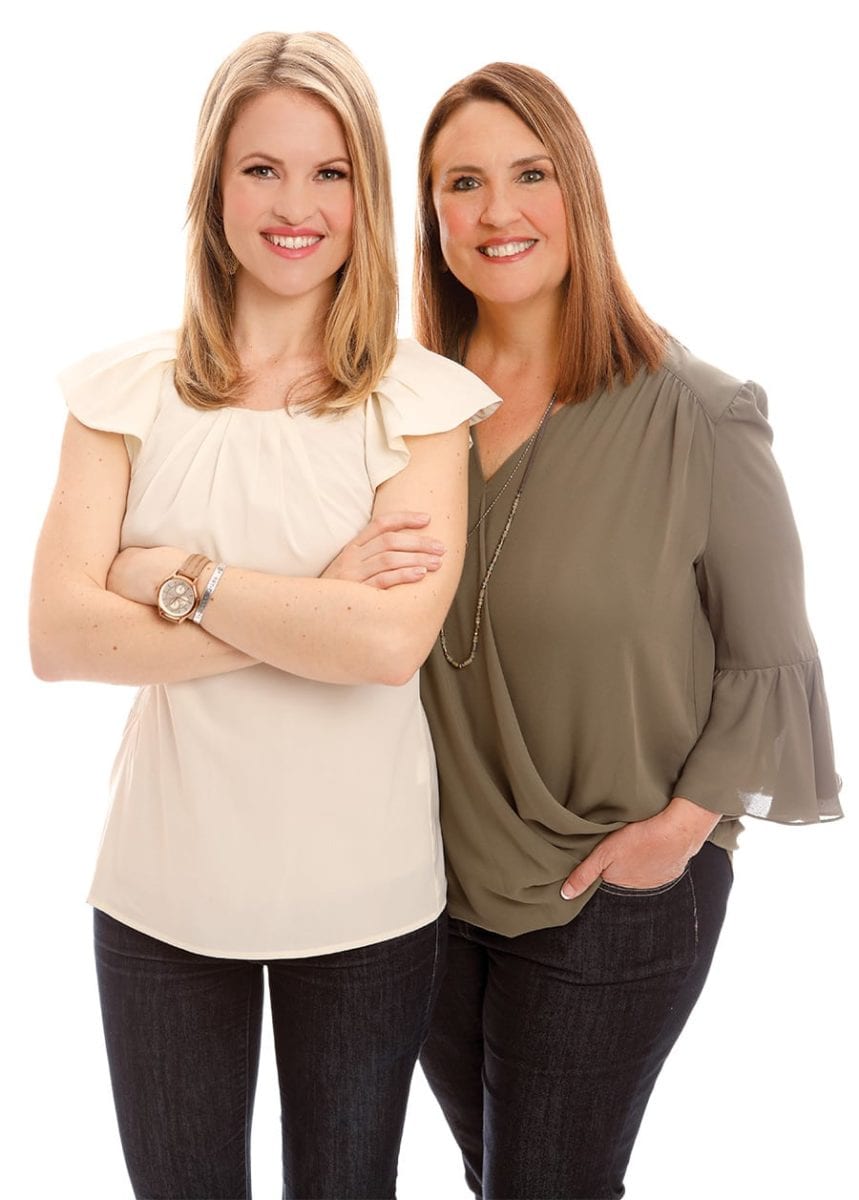 “I felt I could do so much better than what I was seeing in the industry.”- Melissa

Photos courtesy of Handcrafted Homes, Inc. “Can you believe that only seven percent of construction-company owners are female?” Judy Mozen asks. She should know—as past president of the National Association of the Remodeling Industry (NARI), she’s acquainted with virtually everybody in the trade. And, as a master-certified remodeler and president of Handcrafted Homes, Inc., Mozen is a rare sight—a female leader in the world of home building and remodeling. 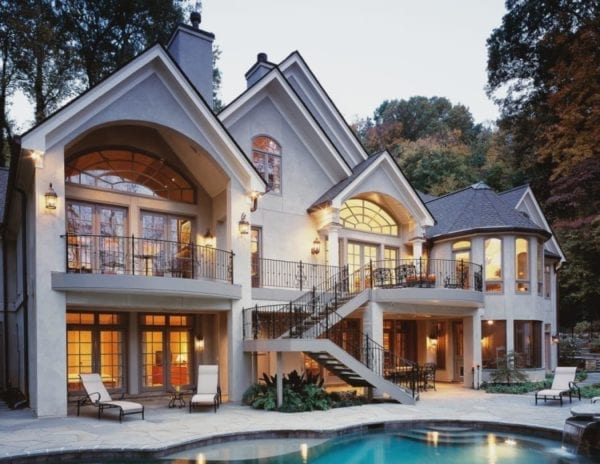 Mozen is proud to show off this north Atlanta remodel project, situated along the Chattahoochee River. “This was an incredible remodeling opportunity. We had the right client and the right location to create a dream house. I love the gabled private balcony off the master bedroom, overlooking the river.”

When asked what she brings to the table, as opposed to her male counterparts, she answers quickly, “In reality, women are very detail-oriented. If a problem comes up, I’m going to catch it right away. I think women are more willing to converse about things, too. I see that as a big plus. Some of the guys I’ve worked with within NARI have told me they learned from watching me—they want to learn how to talk more with their clients, to find out more about what they want.”

“Construction is probably one of the few industries in the world that’s kind of off-limits to women,” she comments. “There aren’t that many women who know much about construction. Some of the strongest women I know, who are running big companies out there—when it comes to construction, they back off. One female client of mine told me, ‘You’re the only contractor I interviewed who looked me in the eye.

The other contractors would look at my husband.’ So there’s a comfort zone for women when they work with me.”Mozen emphasizes that point: “Women are needed very badly in this industry. I tell women to take classes and get certified. No one can tell you, ‘Lady, you can’t do that.’ Because you can!” HandcraftedHomes-Inc.com 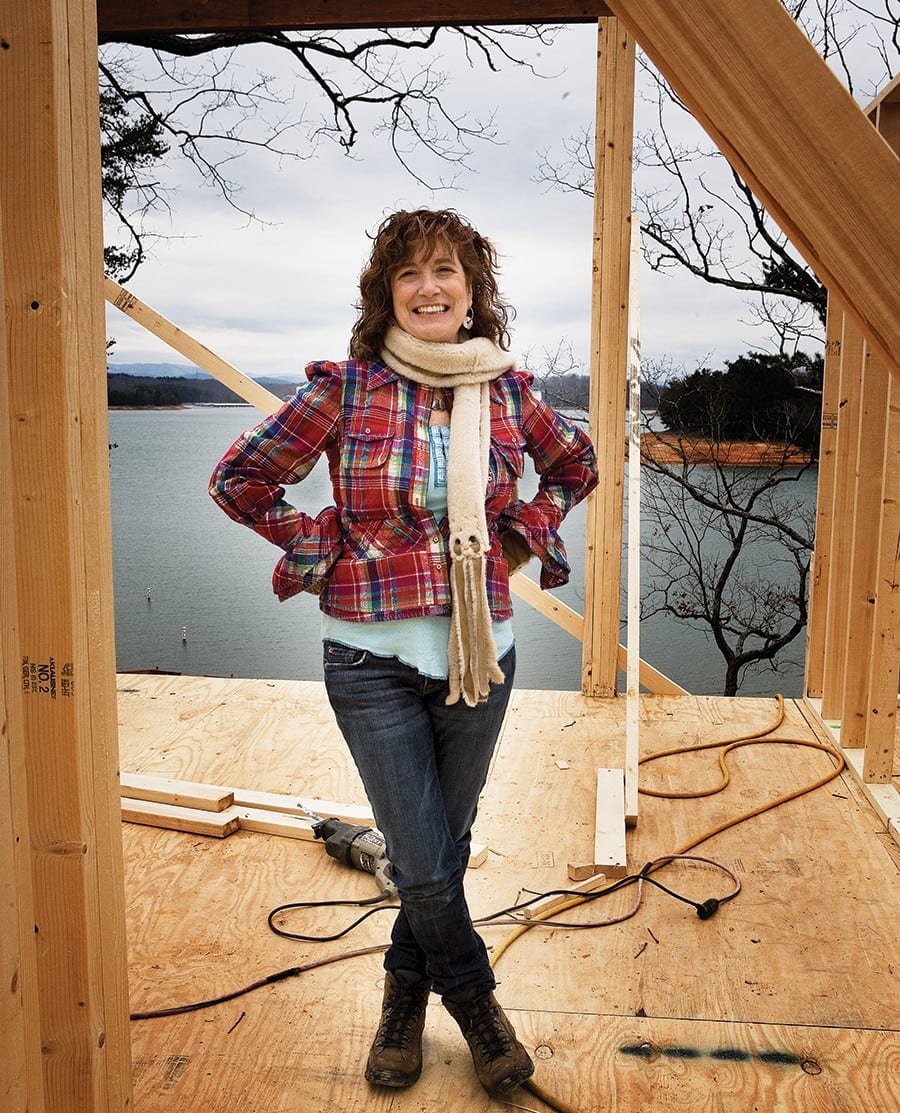 One female client of mine told me, “You’re the only contrator I interviewed who looked me in the eye. The other contractors woud look at my husband.”

As a construction manager for Atlanta Habitat for Humanity, Irene Kagika says she occasionally gets quizzical looks from people she meets. “Many times, when I come to work on a new project, male colleagues or contractors will say, ‘You are the manager?’ Then when we discuss what needs to be done, they quickly find out that I know what I’m talking about,” she chuckles. “Also, it helps when I drive up in a truck with the Atlanta Habitat logo on it!”

For over a decade, she worked as a House Leader, responsible for the entire “build” of a Habitat house, including the crew. Now, she’s been promoted to a Repair with Kindness manager, in charge of rehabilitating homes in need of critical repairs throughout entire neighborhoods where the organization builds.

“Typically, when I say I’m in construction, people think it’s a matter of having strength. But no, it’s about knowledge. Do you know the procedure of putting a house together or repairing it? Do you know what to look for? I do it all—from floors, to put up cabinets, to shingling roofs,” she says.

A major component of Habitat’s program is volunteers for manual labor. “Many female volunteers say, ‘You know, I’ve never done this before.’ And I say, ‘I will teach you, even if it’s just how to swing a hammer. It’s not as hard as it looks.’ They realize it’s doable. My job is to make sure they’re safe, they know what to do, why, and how to do it right.” 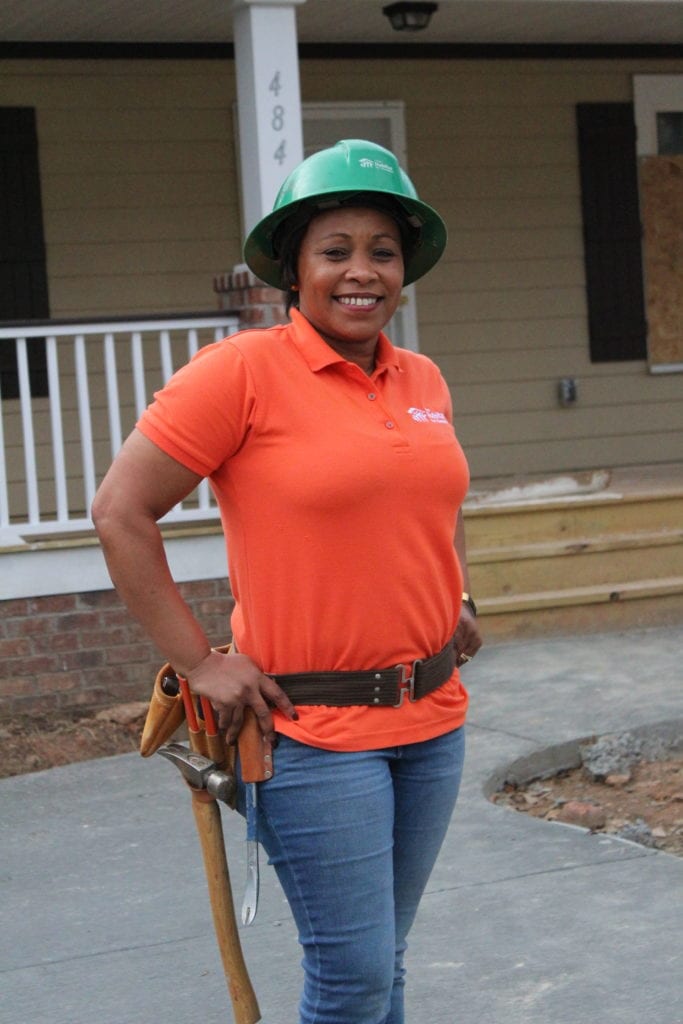 Kagika has been with Atlanta Habitat for Humanity since 2008. She’s currently the Repair with Kindness manager and works full time supervising critical repairs on existing homes.

Many times, when I come to work on a new project, male colleagues or contractors will say, “You are the manager?”

She talks about the rewarding side of her job. “People work hard to qualify to become a homebuyer from Atlanta Habitat. I get to build them a beautiful home, a safe and sound house—we take no shortcuts.” AtlantaHabitat.org

“I can honestly say it never occurred to me that I was entering an industry that was ‘male-dominated,’” Patricia Brown says when asked about her work as a general contractor and owner of a home-building business.

She and her husband opened Keiffer Phillips–Patricia Brown Builders, Inc., almost two decades ago, so she has plenty of experience in the office, but also on job sites with mostly male colleagues.

“I don’t think I’ve needed a tough skin necessarily—but a sense of confidence goes a long way. That confidence is earned by learning what things you need to do a job—humbly asking questions when you don’t have answers.”

As Brown explains, “Building is a collaborative effort between many players: architects, designers, vendors, tradespeople, homeowners and city officials. As is the case in any large group, you’ll find people who are kind of rude, competent or incompetent, skilled or unskilled, informed or uninformed. Being prepared always helps me to break through any barriers that I’ve faced.”

As to the benefits of being female in her business, she says, “It’s been our experience that some people will gravitate to a female project manager, while others will deal more effectively with a male. We make it a point to lay our egos aside, take cues from the client and allow the one who relates the best to be in the forefront.”

Her advice to a young lady hoping to enter the industry? “Get an education and experience—never think you’ve learned all there is to learn. And remember that you’re only as good as the last project you completed. Make it your aim to give your best every single time.” KeifferPhillips.com

“You’ll find people who are kind or rude. Being prepared always helps me to break through any barries that I’ve faced.” 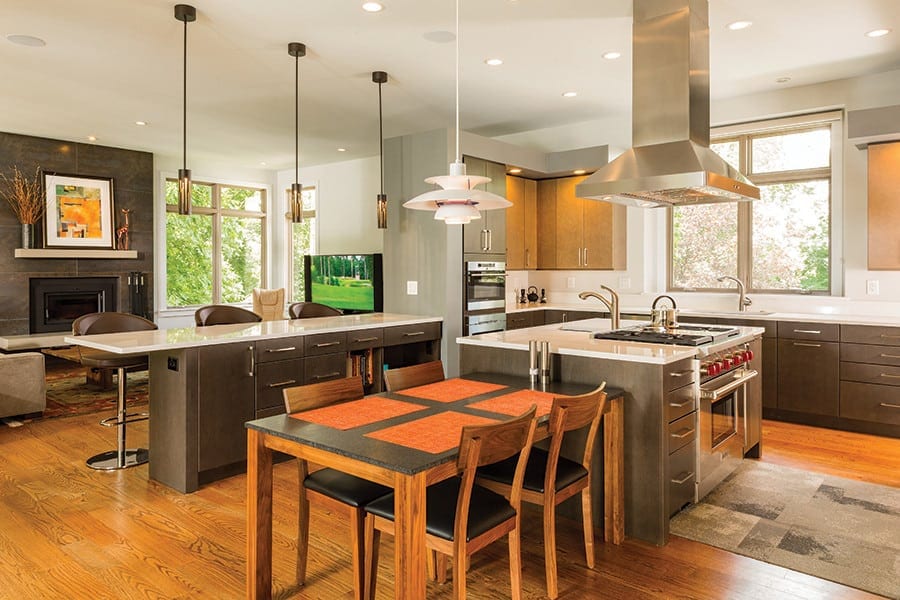 Brown says of this kitchen design in a Garden Hills home remodel, “The flush cabinet-door and drawer style is simple, but using different wood-stain colors for the upper and lower cabinets adds visual interest. They make the kitchen look well-planned.”

You might call Laura Green a general contractor to the stars. She recently supervised the construction of a giant tree house for Atlanta resident Shaquille O’Neal as it was filmed for the Animal Planet network’s “Treehouse Masters.”

She ticks off a list of other TV shows where her crew has done behind-the-scenes construction: Netflix’s new season of “Queer Eye,” HGTV’s “Elbow Room,” season one and two of FOX’s “Home Free,” and the DIY Network’s “Super Great Rooms.” “My crews help with carpentry, building, framing, installing windows, painting—everything. And my evening crews help the shows stay on schedule when needed,” she says.

Green is used to being one of the only women in the room. “Everyone who meets me thinks I’m a designer because I’m female. But I’m a licensed general contractor with my own building and remodeling business. The TV shows are just a side gig for me.” She says she’s never been afraid to walk into a male-dominated arena to compete head-to-head.

“For example, I play poker. There aren’t a lot of women doing that. I’m not going there to prove a point—I just don’t feel limitations. I don’t feel out of place. I have five sons and a husband! So I’m used to being the only girl. My undergrad degree was in computer science and, let’s face it, that used to be nothing but dudes.

I’m competitive and math-oriented, which are traits a lot of guys have, so I’m comfortable with them.”But for women who might be more hesitant than she was to enter the construction industry, she has some advice. “Do your homework and know what you’re talking about. Dive in! Show confidence. You can’t know everything about remodeling. Surround yourself with people who do know the things you don’t.” GreenRemodeling.com 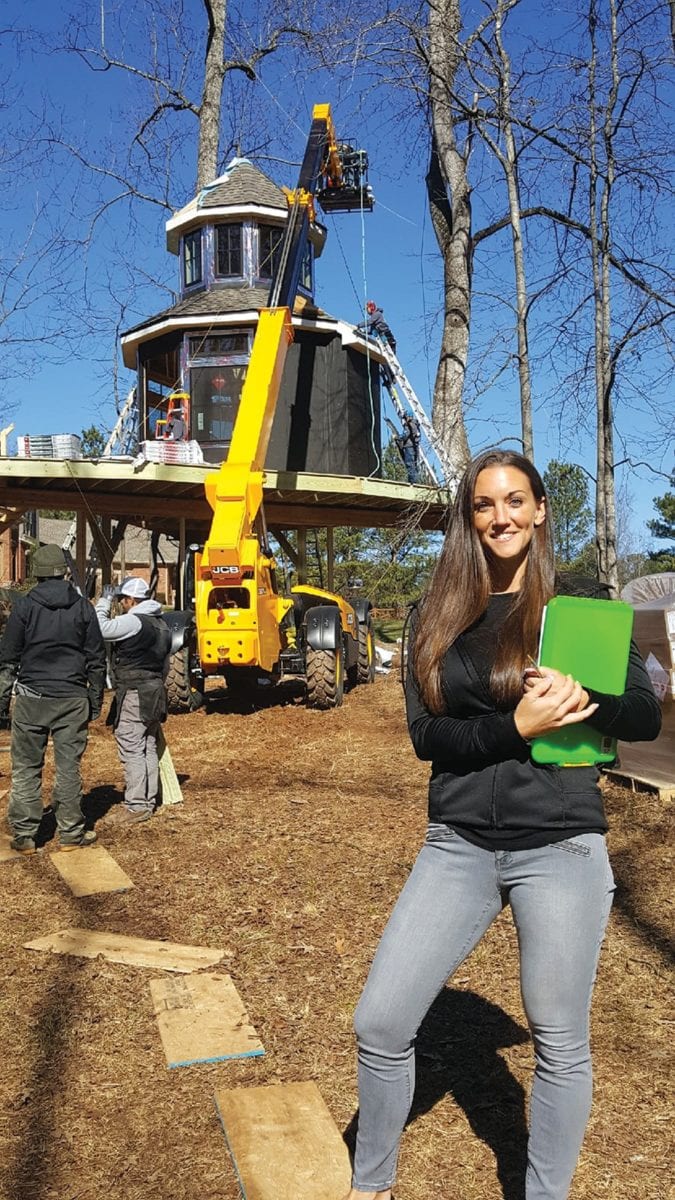 One of Green’s most recent projects is a tree house built in McDonough for Shaquille O’Neal—her company is a behind-the-scenes general contractor for Animal Planet’s TV series “Treehouse Masters.

I don’t feel limitations. I don’t feel out of the place. I have five sons and a husband! I’m used to being the only girl. 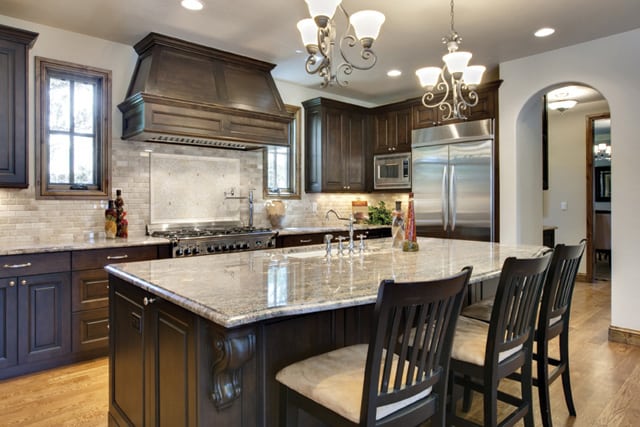 Invest in stunning countertops for your home 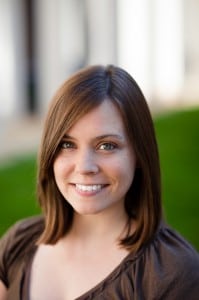 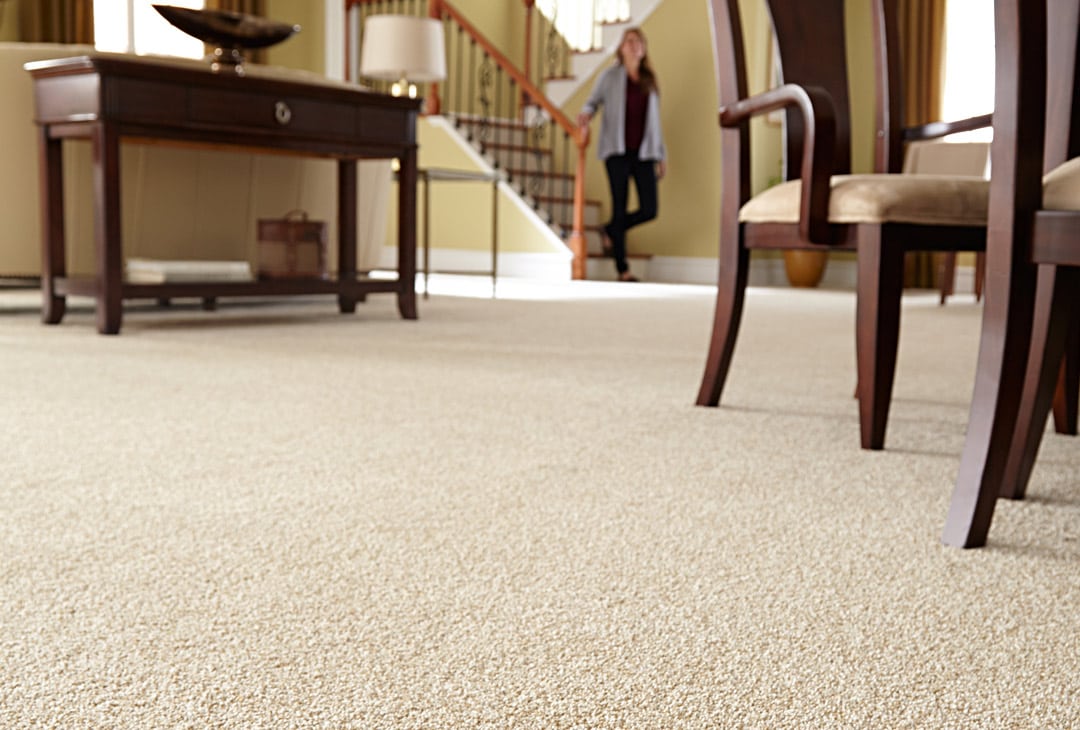 Carpet Buying Guide: Which Type Is Right For You?