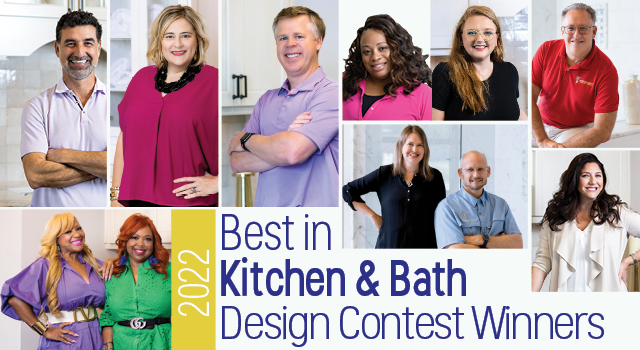 Out of hundreds of projects by talented designers and remodelers around Atlanta, these six were voted by you, our readers, as your favorites. Flip through the following pages for takeaway tidbits from designers and exciting inspiration to reimagine your own space and redefine what’s in.

A special thank you to our sponsor 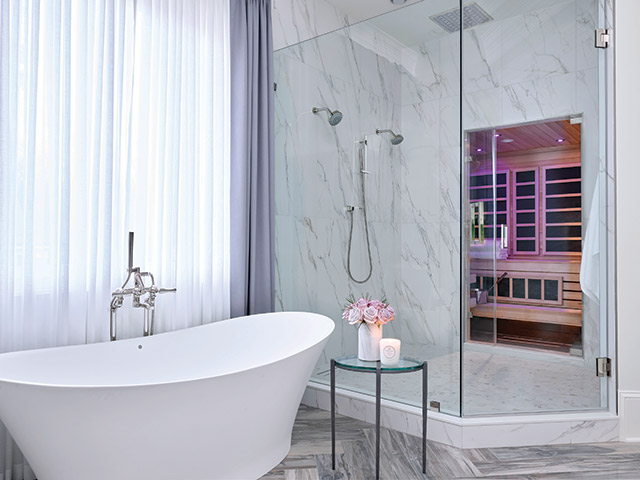 What was the inspiration behind this bathroom transformation?
The main idea was to give this couple a place where they can go relax; a space that just makes them happy. The husband is very tech savvy, so he wanted to be able to run a lot of the amenities like the shower and sauna from his phone.

Why did you incorporate an infrared sauna into this space?
We wanted to go above-and-beyond to provide a true hotel-esk spa escape. Working with Kit Castaldo Design, we devised a plan to discreetly integrate the sauna in the space alongside the shower so the homeowners could easily transition between the two. A cancer survivor, the client was also excited about the sauna’s potential healing benefits.

What common mistake do you see homeowners make when renovating their bathrooms?
Keeping everything in the same layout and not thinking outside the box. Oftentimes, it comes down to cost, especially when moving certain fixtures around, but you can often make a space work so much better for you by small changes to the layout. 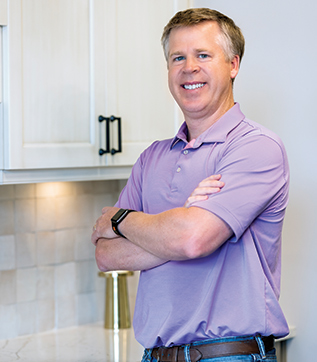 ABOUT ERIC KOEHLER
After his fast rise as project manager and director for large commercial and residential construction companies, Eric Koehler decided in 2008 to take all of that knowledge and start his own remodeling and construction company – Southland Development Services. In less than a decade, Koehler has led the Southland team to become one of Atlanta’s largest upscale home remodeling businesses. 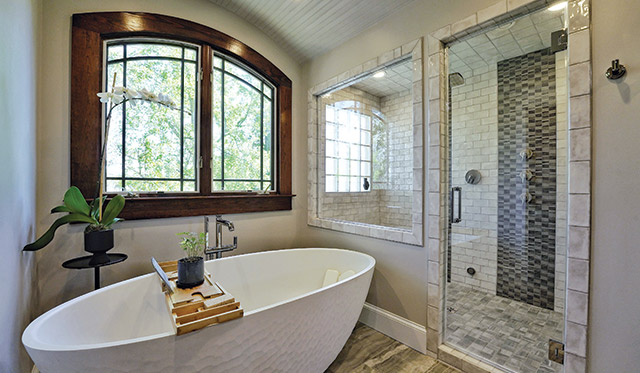 How did you implement the client’s vision into your design?
The homeowners wanted to update their older craftsman home without sacrificing its character or changing the footprint. We were able to reconfigure the layout to create a whole new look with a gorgeous tub with modern fixtures as the centerpiece sitting in front of the old craftsman window. It was definitely a balance between modernizing the space and paying tribute to its history!

What is the most important part of designing a bathroom?
Before you even put pencil to paper, the very first thing to do is determine who’s using the space and how they want to use it. Once that’s decided, I would recommend working with a designer, like myself, to bring in cohesive elements that support your vision. 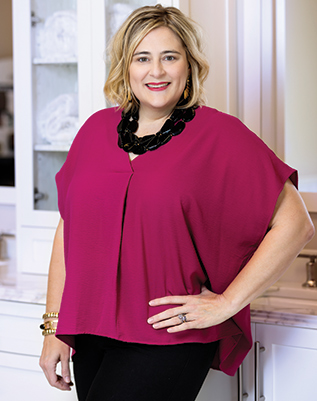 ABOUT JENNY WARNER
Jenny Warner has been an Atlanta-based interior designer for the last 16 years. “How will home feel to you?” is the question that guides Warner throughout her creative process. Her designs, in both the residential and light commercial sectors, are seen throughout metro Atlanta and the southeastern United States 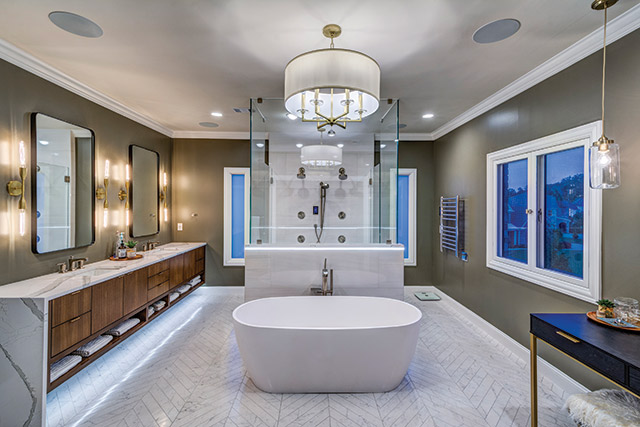 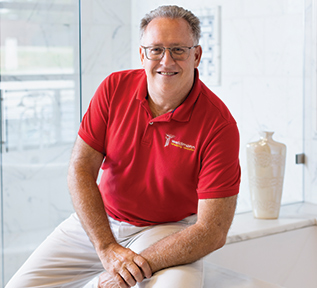 How does this design work both functionally and aesthetically?

Originally, the homeowners had to leave their bedroom to enter their bathroom. With the architectural design work of Kim Hollis, we made a direct connection from the bedroom to the bathroom. Interior designer Sarah Jordan implemented a monochromatic color scheme, floating vanities, a waterfall countertop and appealing and functional lightning. 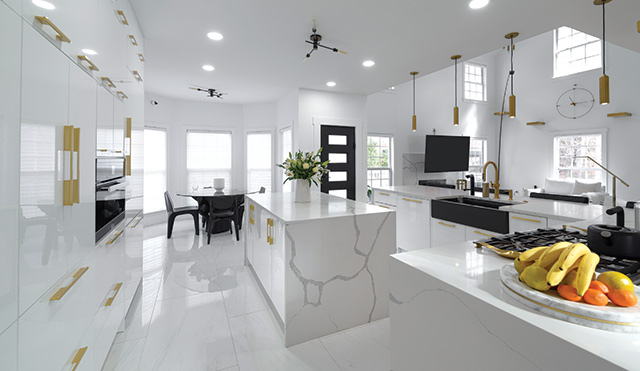 What was the inspiration for this kitchen design?
The clients had a super contemporary design style and were drawn to minimalist clean lines. We wanted to draw on their European ancestry and love for sleek spaces to create a space that was timeless yet modern.

Describe a surprise in the transformation process that you had to overcome.
Because this project took place in an older home, as usual, we had a few surprises come up. The homeowners really wanted to remove a wall to adjust the design layout, but because a downdraft needed to land there, we had to be a little creative and leave part of the wall in place. Sleek lighting and the bright white countertops still allowed us to create a space that felt airy and open.

What are your top tips for readers who want to reimagine their kitchen?
• Be open-minded and try to step outside your comfort zone.
• Don’t be afraid to incorporate color into your design, along with textures.• Lastly, bring the outdoors in with the addition of greenery. 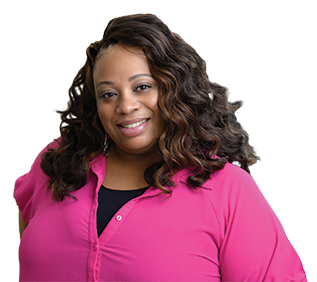 ABOUT PRINCESS THOMPSON
Princess Thompson marries her ample knowledge of interior design with well over two decades of kitchen and bath remodeling experience. Her creativity, exceptional eye for color, enthusiasm for design and function, and love of tile design will set your space apart. 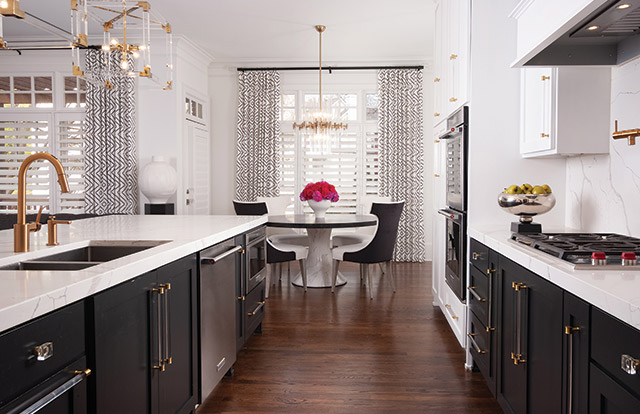 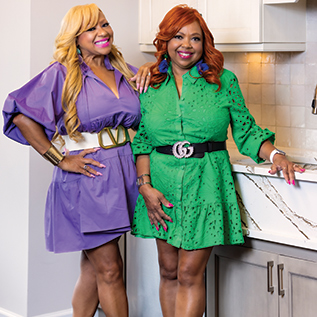 How did you incorporate warmth into an otherwise sleek and modern space?
One of the things the client really wanted was a modern black and white kitchen. In our conversation, we advised them to implement certain additions to keep the space from feeling stark. Elements like rich hardwood floors, whimsical artwork and pink accessories can help warm up the space as opposed to having one black and white palette. 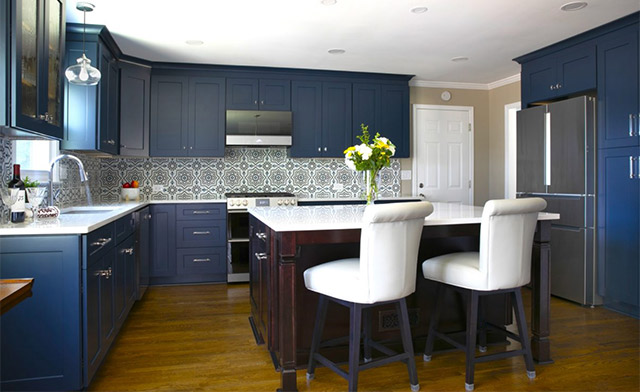 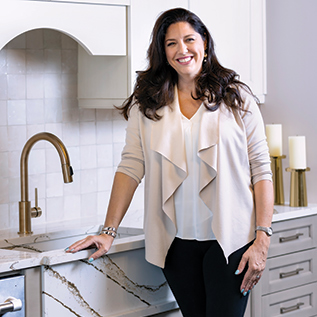 What were the client’s top design requests?
A much better use of space was a must! The kitchen felt lopsided with too much open space on one side and not enough counter space. The couple has two giant dogs who always eat the cat’s food, so we incorporated a rollout tray in the pantry to feed the cat and put away when it’s not needed. They also craved color, so we went with these deep blue cabinets and a java wood stained island.

Here are more projects readers also loved that are sure to spark ideas for your next remodel. 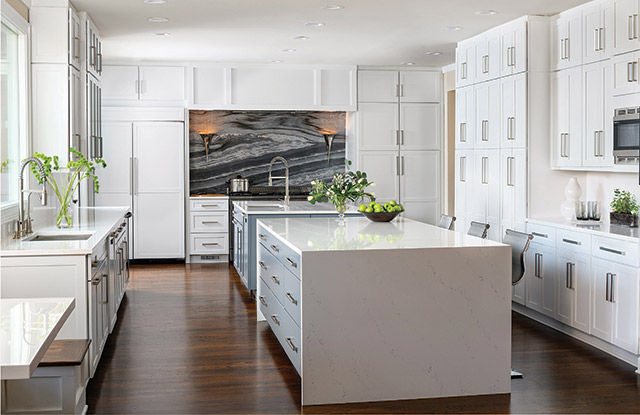 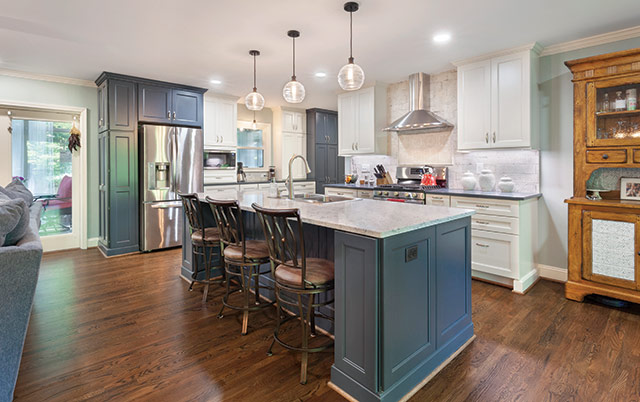 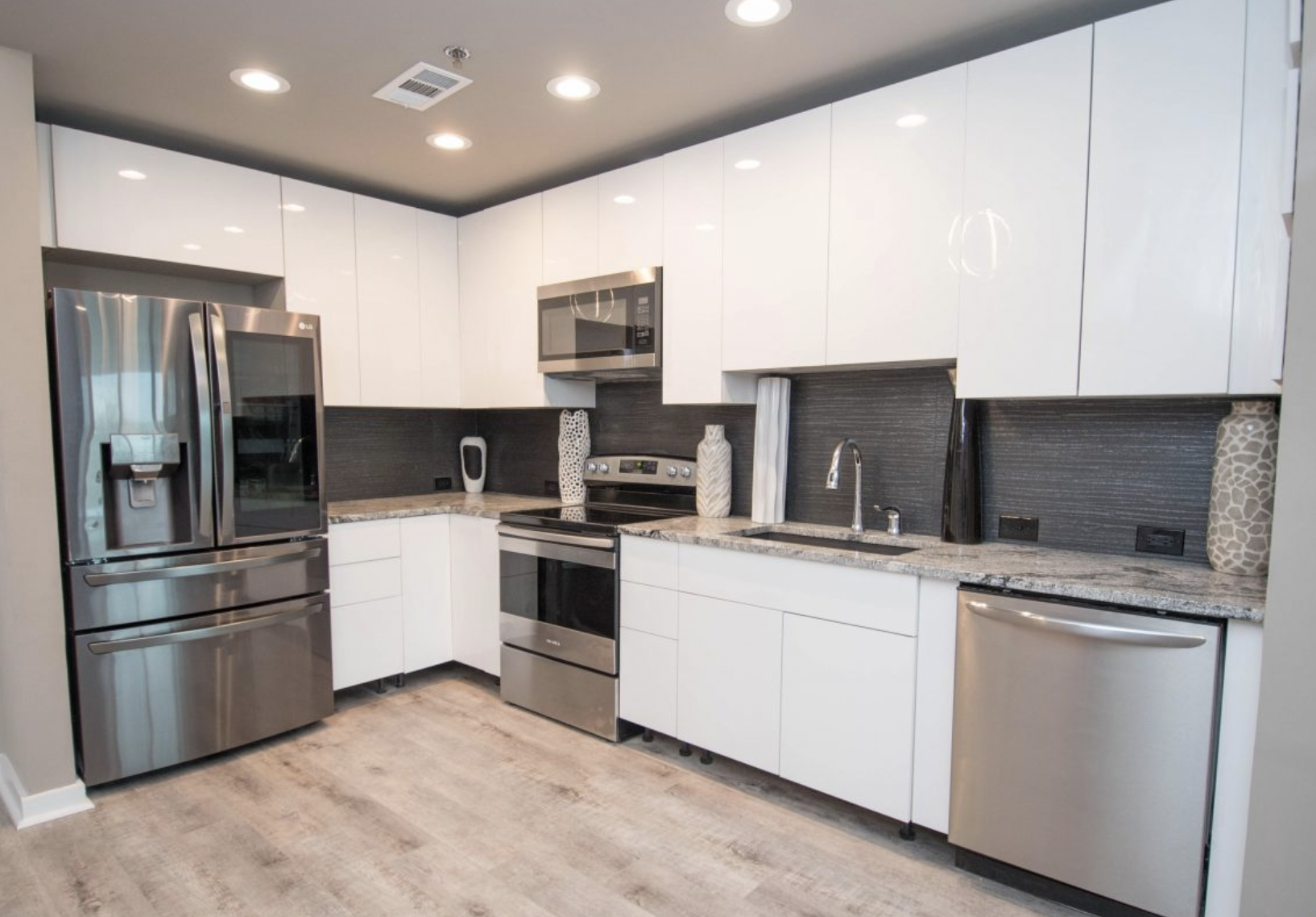 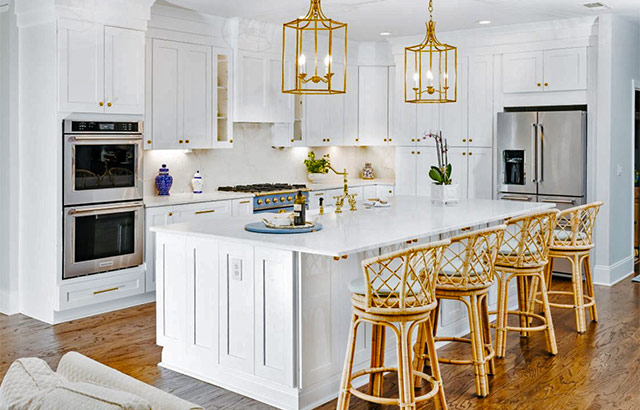 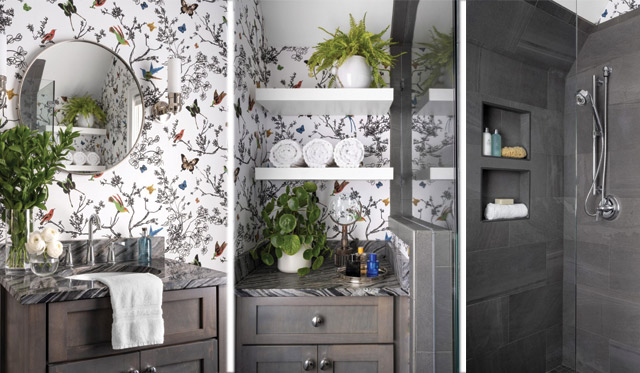 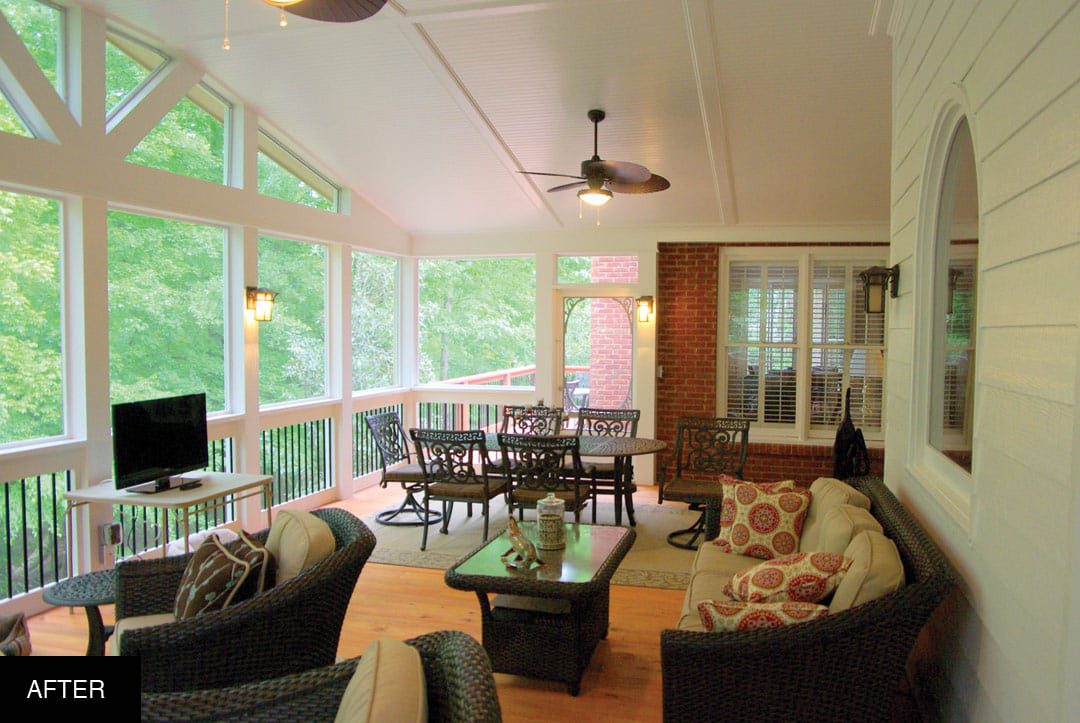 Deck Ideas: Should I Repair or Replace My Deck? 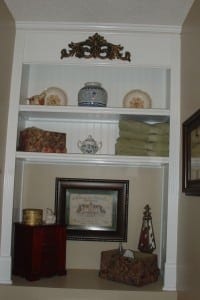 6 Steps to a Lawn You’ll Love