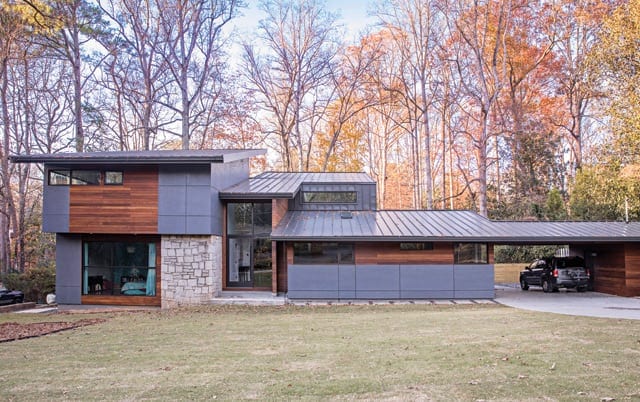 Almost 100 years after they first began to dot the suburban landscape in the 1920s, ranch-style architecture is making a comeback. The ranch house was designed for a casual, laid-back lifestyle, focused on family life. It revels in the informal aspects of living and entertaining, with large, uninterrupted rooms in a house wider than it is deep, allowing for plenty of sunlight and views of the outdoors. Here, Atlanta architects and designers celebrate the low-slung classics, taking them from tired to top-notch.
1. OPEN IT UP
Contractor: Billy Hendrickson of Terracotta Design Build , TerracottaDesignBuild.com
Designer: Katelyn Rountree
Location: Buckhead
Square Footage: 1,653
The key to this ranch remodel was to remove interior walls wherever possible. “We created an open-concept living space to connect the kitchen, dining room and outdoor patio,” says designer Katelyn Rountree. The homeowners, a young couple in the family-planning stage of life, wanted to incorporate their personal modern, eclectic style into every detail. White-washing the brick on the home’s façade created a crisp backdrop for the colorful front door. That same modern juxtaposition of light and dark worked wonders in the living room and kitchen, where black beams on the ceiling and dark wood floors contrast with the bright Ann Sacks subway tile backsplash and Cedar & Moss kitchen lighting.

2. RAISE THE ROOF
Contractor: Small Carpenters at Large, SmallCarpenters.com
Designer: Amanda Johnson
Location: Buckhead
Square Footage: 4,910 (including the basement)
“The Craftsman style was the homeowners’ favorite and we introduced details of that design era wherever we could,” explains Amanda Johnson, the designer of this lovely ranch remodel. The family didn’t want to tear down the house in order to make more space, so they decided to add a second story. By breaking up the mass of the home with lower roofs and new siding materials, the overall scale was kept in proportion. The front porch and screened-in back porch incorporate Craftsman-style elements like stone piers, tapered-wood half columns and wood railings. Inside the living area, the dark coffered ceiling adds another Craftsman touch. And an expanded kitchen is the new focal point for the room, with its cherry cabinets (also used in the bathrooms) and peninsula counter with casual seating.

3. FABULOUS FACE-LIFT
Contractor: Red Barn Homes, RedBarnHomes.com
Designers: Anita and Ken Corsini
Location: Austell, Ga.
Square Footage: 2,150
Ken and Anita Corsini, hosts of HGTV’s new “Flip or Flop Atlanta,” purchased this dilapidated home, which was used for the show, with the intention of remodeling it and immediately putting it back on the market. “Ranch homes are always in demand because they are desirable to a broad base of buyers,” says Anita. “The interior of this home was tricky, though. The kitchen was very dated. It took some maneuvering to expand it and create a flow for the house.” The design included an inviting countertop with bar seating looking into the kitchen and a dining area that seats six. And Anita says of the front yard makeover, “If there was ever a house that needed curb appeal, it was this one. I can truly say it deserved a prize!”

GO MODERN
Contractor: Dan Kaufman of JE Dunn Construction, Dencity.us
Architect: Bryan Russell, R. A., co-owner of Dencity, LLC
Other: Nick Harrell of Core Landscape Group
Location: Chastain Park
Square Footage: 4,686
The homeowners of this ranch remodel wanted more space throughout the house, but also a large common area, inside and out, to be used by the whole family. “The challenge here was how to add a second floor onto a mid-century modern, low-swept ranch house and not overwhelm it. We wanted to make the addition and renovation seem like one house—not two separate pieces added together,” says architect Bryan Russell. He says the homeowners love the look of modern materials, like the concrete paneled walls (no paint required), European laminate cabinets and Caesarstone countertops in the kitchen. Outside, they chose to use eco-friendly Brazilian ipe wood siding and prefinished commercial aluminum storefront-type windows. 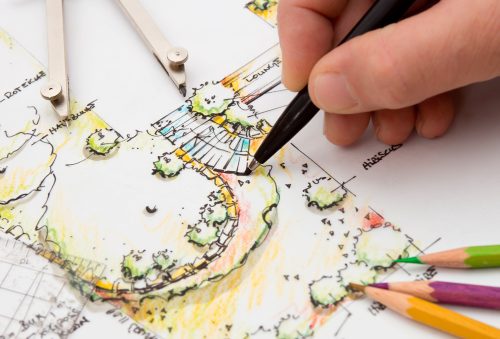 Home Renovation on the Exterior 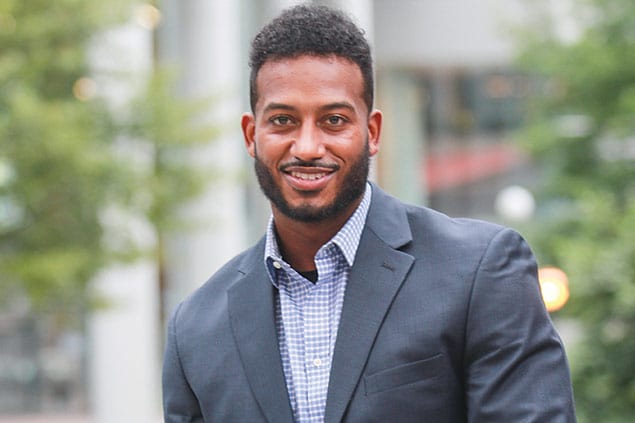