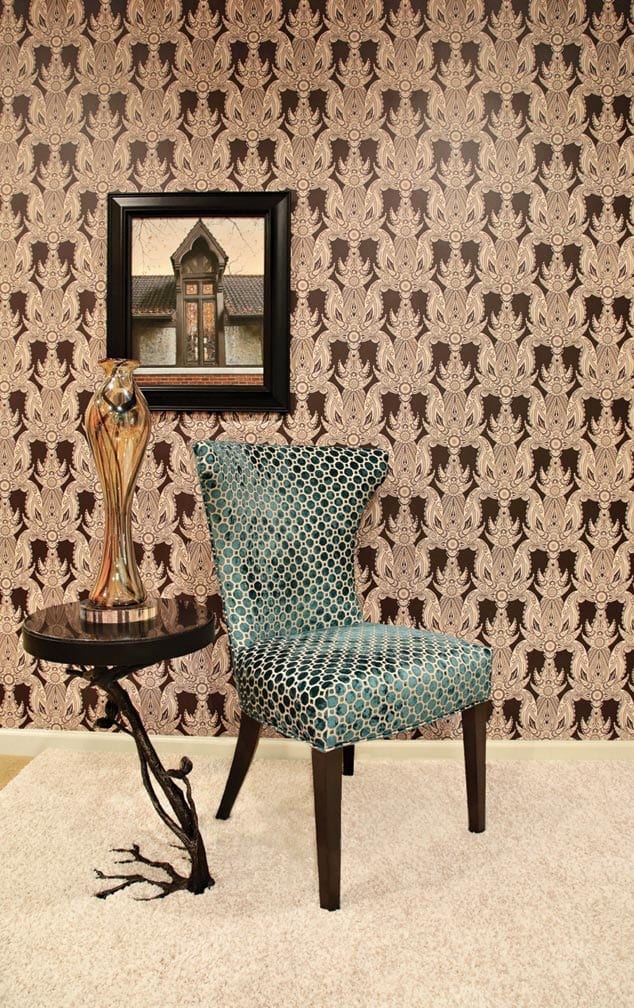 With the start of a new year comes a turn to new designs and trends for the home. Every aspect of the home will see some change to a certain extent, although it won’t stray far from tried-and-true design aesthetics. “The boldest designs for 2014 are based on classical styles,” says Ann Wisniewski, ASID, president of AJW Designs Inc. in Roswell. “Keeping it simple is the key to the classic, elegant interior, but try to introduce trendy elements that can be changed easily.”

Several of Atlanta’s design experts shared with us their thoughts on what will be hot in homes for the next 12 months.

Wall wonder
According to Laurie Laizure of Customized Walls, design experts throughout the country are calling for wallpaper as one of the hot trends for the year ahead. But for some, the idea of wallpaper is scary because they see it as a commitment and difficult to install and remove. However, says Laurie, “this is why I was drawn to a poly fabric material that has a repositionable adhesive. You can stick it on and peel it off without damage [to walls]. More importantly, you can print almost any pattern or even photographs wall size.”

According to Jessie Danielle LaFalce, owner and president of Jessie Danielle LaFalce, Interior Designer & Lifestyle Consultant in Atlanta, texture will coalesce into a popular 2014 style trend: coastal decor. “What used to be relegated only to beach houses along the East and West coasts is being incorporated into homes throughout the entire country,” she says. As such, she says, coastal design works best when mixing many different textures, such as washed woods, natural reeded rugs and tiles that are glazed in watery blues and turquoise.

Awash in color
In 2014, the general census for top colors focuses on blues, yellows and grays. “I feel like we will be seeing more blues in many different shades, from light sky blues like Benjamin Moore’s ‘Breath of Fresh Air’ to deeper cobalts and more traditional blues like Benjamin Moore’s ‘Williamsburg Wythe Blue,’” says Constance Raines, principal/owner of CF Raines Interior Design Inc. in Decatur. “I think the mustard colors may make a bit of a comeback in small amounts with these blues, being a complementary color, and I think greens in shades of jade and emerald will continue to inspire and be seen in 2014.”

Rachel Livingston Greathouse, owner and designer of Rachel Greathouse Design in Milton, says she thinks warm grays will remain constant as a go-to neutral. This is reflected in Sherwin-Williams’ new Reasoned and Diaphanous palettes. “The popularity of gray continues to elevate, and I feel it’s replacing beige,” says Jackie Jordan, director of color marketing for Sherwin-Williams.

Furnishing style
For the coming year, expect furniture to be paired with interesting materials. “I believe we going to see some stunning modern designs using natural materials – thick-cut wood tops, soft upholstery – that are made with straight lines,” says Peter Hemerlein, vice president of English Classics in Atlanta. In addition, Joann Kandrac and Kelly Kole, interior designers with Kandrac & Kole Interior Design Inc. in Kennesaw, say they expect color blocking on upholstery, inlaid bone on tables and chests and geometric shapes, as well as the repurposing of antiques using paint and current fabrics.

Also, furniture will feature clean lines and more of a modern trend. “Look for more balanced scale showing up in lines of upholstery as well as case goods,” says Debby Hall, founder and president of Hall & Company Interior Design in Atlanta. “Heavy carving is out, and simple classic lines are making a comeback but often with a twist, a bit of an edge.”

Light it up
New innovations in energy-efficient lighting also will impact 2014 home design trends. “The huge amount of design choices and improvement in color temperatures and affordability in LED lighting and light fixture styles will bring excitement and many possibilities,” Raines says. “Outside illumination with LED fixtures will offer more design options for outdoor spaces, updating our homes’ lighting and also help in saving on our electrical bills. Sculptural glass lighting in a variety of colors for both interior and exterior will be coming in more mainstream designs.”

Specifically for interior lighting, Michael Fortson, showroom manager for Illuminations, which has a location in Atlanta, says lighting should be a key element in home design. “Do not be afraid to make a statement with your lighting,” he says. “It can be the focal point of a room. Don’t make your lighting an ‘afterthought.’”

One way to do this is by mixing contemporary lighting with Old World-style interiors, Fortson says. “Europe has been doing it for hundreds of years,” he says. “It is becoming much more acceptable, especially in kitchens with your stainless steel appliances.”

Popularity contest
Although home experts agreed on many home design trends for 2014, they took their own stance on which rooms would be the “hot” choice for this year. For instance, Don Hagemeister, president and CEO of Totally Dependable Contracting Services LLC in Marietta says master bathrooms are “hot” because people are busy and need a space to unwind. Phil Saylor, owner and director of architectural design for Tuscan Stone Mantels LLC in Norcross, says media rooms and outdoor kitchens are top choices. But Hall votes for the home office. “With so many people working from home either on a part-time or full-time basis, there is more need for efficient, functioning work spaces,” she says.

The kitchen ranked high as well. “This hasn’t changed much as it is the hub of the home and where homeowners spend the most of their time,” Kandrac and Kole say. Along these same lines, Bolick opted for the living room. “More people are staying in and going out less,” she says. “So the rooms are becoming more relaxed, livable and tactile.”

For Raines, the master bedroom suite will be important in 2014. “A feeling of security is a continued emotional need for everyone,” she says. “The bedroom as a secure retreat with luxurious linens and bedding will continue to be a way to provide that feeling.”

Of course, with Atlanta’s mild climate, John Beach, partner with Paces Construction Company in Atlanta, says outdoor rooms and living spaces will continue to be in hot demand. “Covered decks and patios with comfortable all-weather furniture, dining areas, fans, lighting and TV/audio systems can be decorated as casual extensions of the home for family relaxation and entertaining,” he says.

Continuing to improve
When it comes to home improvements trends, two key rooms remain at the top of the list: kitchens and bathrooms. “There is a continued focus on enlarging and opening up older, smaller kitchens that are separated from other rooms in the house,” Beach says. “People spend 40 percent of their remodeling dollars on their kitchens, and all age groups now want larger open layouts.”

Homeowners are looking for more functional kitchens now that they are entertaining at home due to the recession, says Alison Weidner, architectural sales manager for Poggenpohl Atlanta. “People are using their kitchens, and they want the best quality they can afford,” she says. “They are making an investment and want a good return on that investment.”

The same could be said for bathrooms. “If you add a bath to a smaller home, you have increased the value, in most cases more than the cost,” Saylor says.

With a new year comes new ideas and a desire for a fresh start. These home design trends certainly give homeowners a great, stylish place to begin. 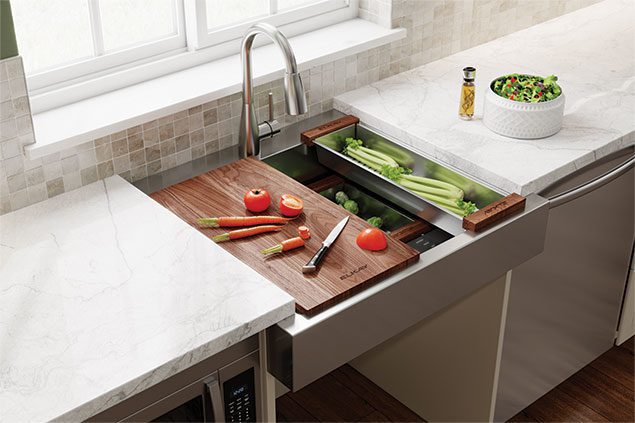 9 trends for your kitchen and bath 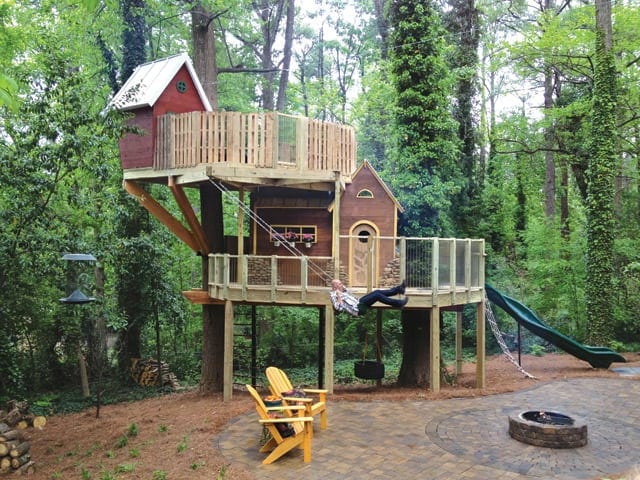 Climb Up to a Tree House for the Whole Family 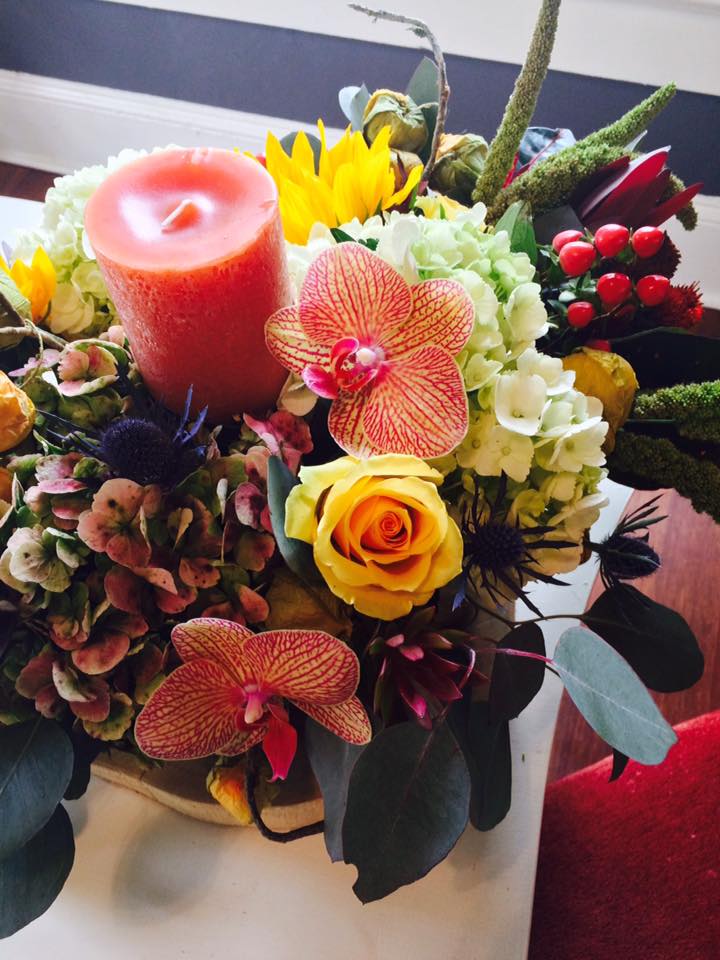