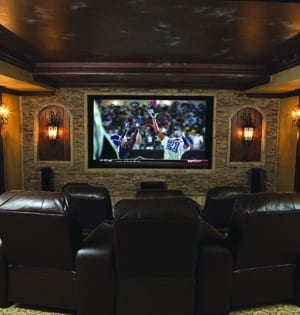 The switch to digital TV made many homeowners re-evaluate their dated home-entertainment systems, and while you may not be one of them, the incredible variety of newfangled technology will have you drooling with envy in no time. But with all the options and accessories in audio, video, gaming, controls and more, your head will be spinning. Here, Atlanta’s custom-electronics experts weigh in on options both new and tried-and-true. 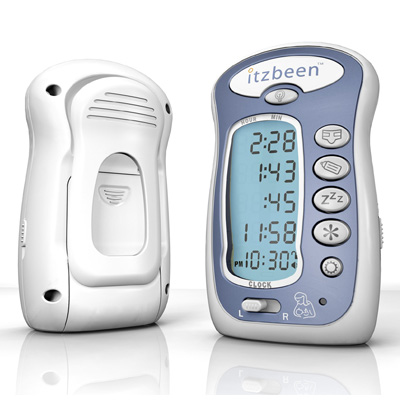 An integral part of today’s home-entertainment system is the programmable remote control. Much more than the universal remotes of yesteryear, today’s remote controls can be programmed not only to control the video and audio functions, but also the lighting, window shades, thermostat and more.

“Programmable remote controls can make a sophisticated media room easy enough even for a child to use,” says Michael Garrison, president of Garrison Home Theater Inc. “They are available in many styles, including a standard remote style with labeled buttons, remotes with LCD readouts near the top or even full-color touch-screen remotes. Pressing a button that simply says ‘Watch DVD’ can turn on your TV, set up the surround sound and start playing the DVD player.”

Thousands of movies are released every year, and your DVD collection can hardly keep up. If only there was a way to store all of your movies—and CDs, video games and photos, for that matter—in a searchable database that you can access and add to at the touch of a button … wait! There is such a system: media servers.

“Store thousands of DVDs, CDs and family pictures for viewing on every TV in the house,” says Chuck Schlick with Digital Interiors Inc. Like most technologies, media servers are offered in several different types and functions, and the more functions the server offers, the higher the price. On average, media servers can range anywhere from $1,500 to upwards of $20,000. “Basically, a video server acts like an iPod for your movie collection,” Alexander says. “The price is determined by the ease of use loading movies and by the number of different ‘streams’ the server can output at one time.”

A more affordable option in media servers is the on-demand server, which can cost as little as $300, Garrison says. “Products such as Vudu, Netflix on-demand and Apple TV all offer extensive movie libraries, including new releases,” he adds. 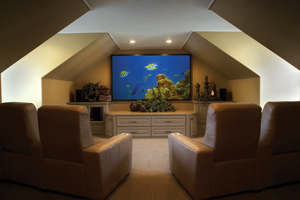 Your comfort level greatly affects the quality of your experience with a home-entertainment system, so seating is a big decision. Many homeowners opt for theater seating in their home theaters, maximizing comfort, visibility and capacity. And, since this is not a totally new option, the features of the theater seat have evolved.

“Theater seats are available in a variety of styles and materials,” Alexander says. “The seats can be powered or gravity operated. Powered theater seats provide a nice benefit because they stay in the desired position once set. Other options that are available are lighted cup holders and powered headrests.”

Alexander says that the costs of theater seating can range from $650-$2,500 per seat.

“The biggest benefit that front projectors provide is the size of the viewing screen,” he adds. “Using front projectors, we are able to provide screen sizes of up to 106 inches diagonally.”

Make sure you choose a projection screen that works well with your projector and the light levels of the room, Alexander recommends. “Screens are manufactured using a variety of materials that have varying gains associated with them,” he says. “Selecting the proper screen requires examining the projector specifications and the viewing environment’s light levels.

Now you see it…

If you don’t have a separate room to use as a dedicated home theater, you can transform any living space or den into a media room with a motorized screen, says Seth Herold, owner of Home TheaterWorks. “The screen can be concealed in a ceiling or millwork,” he adds, noting that the costs of this option are $2,000 and up, depending on the size of the screen and the complexity of the project.

This option also works well for homeowners who can’t decide between a TV and a projector with screen.  “An emerging trend in media rooms is to use two screens,” Garrison says. “For most days, all you see is a flat-panel TV on the wall for normal TV watching. On movie night, press a button on your remote and a hidden projection screen lowers in front of the flat-panel TV for the ultimate wide-screen experience.”

Between pixel counts and the Blu-ray craze, so much attention is paid nowadays to the video aspect of a home-entertainment system, but audio can be just as important to the experience. “A smaller screen with great audio will provide a better experience than getting the biggest possible screen and pairing it with weak audio,” Herold says.
Alexander agrees. “Some experts in the entertainment industry believe that sound is responsible for 60 percent of the entertainment experience,” he says, citing the three main styles of audio systems as in-wall, on-wall and floor-standing. “Ideal placement of the speakers within the room is defined by using angles that correspond to the main listening location,” he adds.

Another important, often overlooked audio consideration should be made for acoustical treatments and sound-deadening materials. “Most people work so hard to get the sound to come off right, but if the audio is not controlled correctly, there is a lot of money being thrown away,” Schlick says. “This area [of home-theater design] gets neglected more than any other because it is not as ‘sexy’ as some of the other aspects, since you don’t see it.”

Contrary to popular belief, when adding components to your home-entertainment system, it is not always in your best interest to stick with one manufacturer. “Using components from separate manufacturers provides the ability to select the best of the breed,” Alexander says.

Herold agrees. “A custom-designed system combines the best pieces for the job from different manufacturers and creates an integrated system,” he says.

There is one area of your home-entertainment system that should have components from the same manufacturer, though. “It is important to have all the speakers from the same manufacturer to ensure that all the speakers have the same tonal sound,” Alexander says. But this rule doesn’t apply to the audio receiver—in fact, the opposite is true. “A good rule of thumb is that a high-quality speaker manufacturer doesn’t build receivers, and a high-quality receiver manufacturer doesn’t build speakers,” Alexander says.

Ever been in a brightly lit movie theater while watching the latest flick? We didn’t think so. Dimming the lights is an important part of the entertainment experience, but turning them off completely isn’t always the best option. “Lighting sets the mood!” says Eric Joy, general manager of Georgia Home Theater. With today’s automated controls for lighting, Joy says you can “preset mood lighting for the different ways you will entertain in the room.” Depending on the number of zones being controlled, these systems can cost anywhere from $200 to $2,000 for the room.

The array of technological components to a home-entertainment system can easily add up to tens of thousands of dollars, which may be beyond your budget right now. But this doesn’t mean you can’t begin the process of achieving the home theater of your dreams. “Work with a designer who is able to plan for incremental steps, which allow for upgrading over time to achieve a particular goal,” Herold says, adding that a designer can make initial components robust enough to handle future additions/upgrades in a building-block fashion, as opposed to finding out later that the installation has limited the build-out potential of the project. 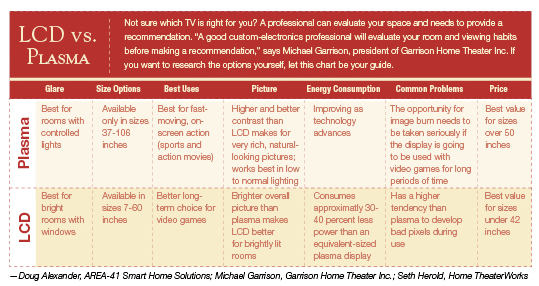 Want the amenities of a home theater without the costs and carbon footprint of a high energy bill? Check out these energy-saving options.

Hire a custom installer (CI) for your home-entertainment system, and you’ll get the following benefits:

Homeowners looking for the best value when upgrading their current home-entertainment system should invest in audio, says Eric Joy, general manager of Georgia Home Theater. “Video technology is constantly changing. Put your money in the speakers, where a nice set today will be just as nice 15-20 years from now.”

The most common pixel-aspect ratio for a front projector is 16:9, with 2.35:1 becoming more readily available. The 16:9 screen format is the most popular, but results in black bars above and below the video when viewing a wide-screen-formatted video. The 2.35:1 format eliminates the black bars. To get the 2.35:1 wide-screen video on your current projector, you may be able to purchase an anamorphic lens for anywhere from $2,999 to $5,999.
—Doug Alexander, president, AREA-41 Smart Home Solutions 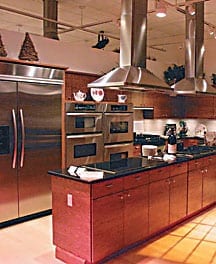 Take It For a Spin 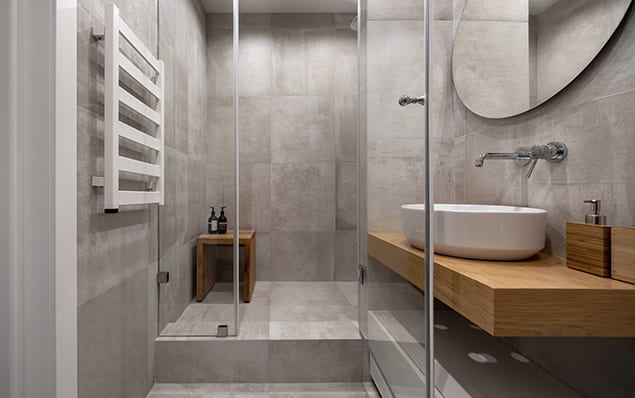 Q & A – What are your recommendations when it comes to the types of coatings I should use for my shower door? 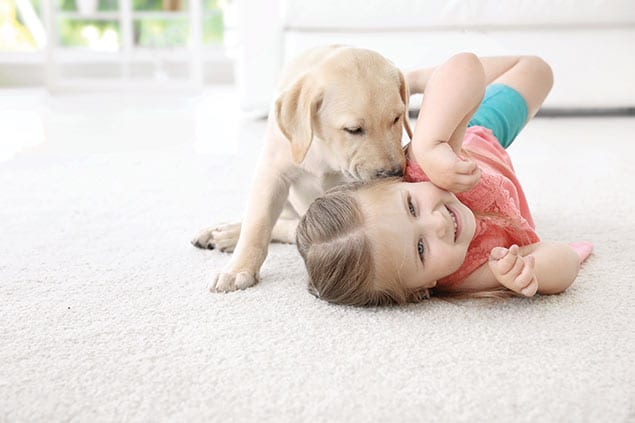