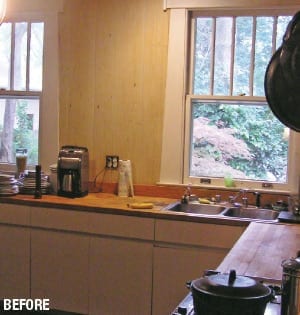 Few living spaces make more of an impact in the home than kitchens and baths. These well-used areas present huge opportunities for remodeling projects, breathing new life into tired spaces and increasing enjoyment of the home. With Atlanta area homeowners staying put longer, many are turning to highly personalized kitchen and bath remodels to get more out of their current living space.

What began as a simple discussion about enlarging a window space to bring in more light quickly turned into a full-scale kitchen makeover that combined modern conveniences with historical authenticity. The Midtown bungalow, owned by contractor Chris Jones of HR Construction, had character, but lacked personality and functionality in the kitchen. “The kitchen was grim; it was cramped and didn’t circulate well,” says Steve Robinson, principal of Axios Architecture. “We envisioned a space that would not only be functional, but also would provide access to the beautiful Japanese garden outside.”

With the importance of the garden connection in mind, Robinson used large, unencumbered windows to frame the scenic view and provided direct access to the space with a significant wood-and-glass door. Framing the entire room with cherry wood, he created texture through the use of light and dark tones, staining the upper cabinets lighter than the rich tone of the lower cabinets. “This use of color and tone creates subtleties that really make the room sing,” Robinson says.

Details, such as juxtaposing a circular breakfast bar with the predominantly rectangular concrete countertop, took some convincing, but now provide a cozy nook for intimate dining as well as an eye-catching focal point for the kitchen. Likewise, the custom-fabricated steel range hood, with its hammered medallions, adds modern flair and even more character. “At first, Chris was concerned with the mix of materials and colors,” Robinson says. “But once we discussed it, he agreed that it’s not necessary for everything to match as long as it’s creative and the design simply works.”

Winding down a multi-year, multi-room remodeling project, in which the homeowners effectively transformed their basic ranch from Colonial Revival to French Provincial style, one final space still needed updating: the kitchen. “The existing kitchen had outlived its useful lifespan,” says Tracey Rutherford, co-owner of Pantheon Design-Build. “We needed to bring it up to the caliber of the rest of the house.” To create the illusion of a larger space without changing the original footprint of the kitchen, the builders began by vaulting the ceiling into the attic. The French Provincial influence that extends throughout the home is reinforced in the kitchen with the addition of decorative cedar beams that define the lofty new ceiling and complement those in an adjacent room. A dramatic triple window installed above the sink along with a pair of generous glass-paned doors provides an indoor-outdoor connection and floods the room with natural light. A clean color scheme consisting of creams and barely-gray whites makes the kitchen appear more expansive, while the original floor, stained a deep espresso, is the perfect foil to the room’s pale palette. Simple white Shaker-style cabinets with Carerra marble countertops and a black cast-iron La Cornue range anchor the design. “The homeowners love to cook, and they use their kitchen every day,” Rutherford says. “In this limited space, we combined versatile appliances, elegant materials and unique details to enrich the homeowners’ gourmet experience and create a kitchen worthy of entertaining.”

With in-town living, often what you gain in location, you lose in space. Smaller homes on smaller lots are the norm, but the locale more than makes up for this concession. When Mark Galey, president of Magnet Construction, was called on to remodel the kitchen of an in-town modular home, he found a lot of house with a very little kitchen. “It was like walking into a small cube,” Galey says. “The entire kitchen was enclosed, and there was no flow to the remainder of the home.”

Desiring an open, functional kitchen with space for entertaining, the homeowners wanted to fuse European influences with a contemporary feel. Removing the walls, Galey placed a stainless steel countertop on one side of the kitchen and a rich soapstone countertop on the other side to give the homeowners the contemporary edge they wanted. Stark subway tiles and simple cabinets help delineate the space, while horizontal, white-washed cedar planks emphasize a custom wine rack. Open shelving keeps visual clutter to a minimum while providing needed storage space.

To compensate for the limited seating, Galey custom built a banquette out of plywood and stained it to match the deep tones that accent the kitchen. Unique lighting, such as the cascading globe pendants above the soapstone countertop and the oil-rubbed bronze lantern illuminating the wine rack, differentiates each area of the kitchen. “The homeowners wanted the kitchen to be relaxed. They didn’t want it to look fussy,” Galey says. “All the different elements and details combined give the kitchen a character that truly portrays the way the owners live.”

Undergoing a townhouse redo, designer Robert Kauffman, owner of Kauffman Design, tackled his own master bathroom as a personal project. Classifying the interior as “bland,” Kauffman decided to ramp up the design and infuse the space with a contemporary look. “In this room in particular, I wanted a simple, straightforward design that would highlight the materials,” he says. “So we pushed it as much toward modern as we could.”

With a bend toward contrasting materials, Kauffman used basic travertine tile to create the foundation of the space and added a visual punch with warm black walnut. Entering the 100 square-foot bath, the eye is drawn immediately to the bathtub, which is artfully framed by walnut posts and illuminated by a suspended pendant light.

Adding contemporary lines, Kauffman built box-like cabinets out of the same walnut material, mounted them on the wall and topped them with industrial-looking concrete countertops. “Black walnut is my favorite wood, so I knew this room would contain a lot of that material,” he says. “I also added six different shades of aggregate to the concrete for a uniform texture that would contrast the rich grain of the walnut. This entire project has been about creating something special for my wife and I, and it’s one I’ve attacked with all my passion.”

With small children in the mix, a 1920s Virginia Highland bungalow was in desperate need of more usable living space, namely a master suite. Not wanting to detract from the character of the home, the homeowners quickly ruled out an addition, opting instead to re-imagine the space in their large attic. “Working within the existing roofline posed some spatial challenges,” says Ryan Howard, project manager at Cablik Enterprises. “But, it also forced us to think about the layout from a purely functional standpoint so that we could use every bit of space to its fullest potential.”

In the master bath, with its wainscoting reminiscent of days gone by, the project team creatively tucked a shower enclosure illuminated by an eco-friendly skylight beneath sloping rafters. Remaining true to the home’s bungalow style, they incorporated a modern cast-iron tub with a vintage appeal. Behind it, a large picture window is strategically placed to bring in natural light while maintaining privacy (The neighbors can’t see in.)

Although the room is too small to have large his-and-hers vanities, the concept was creatively adapted to the space with two back-to-back pedestal sinks rather than the traditional side-by-side layout. Topping off the whimsical look, the bathroom floor is covered in tiny black-and-white hexagon-shaped tiles that give it a polka-dot effect. “Everything was devised to maintain that original character of the house,” Howard says. “Aesthetically we wanted it to appear old, but with modern conveniences.” 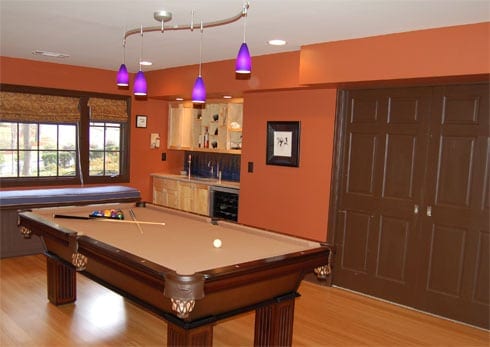 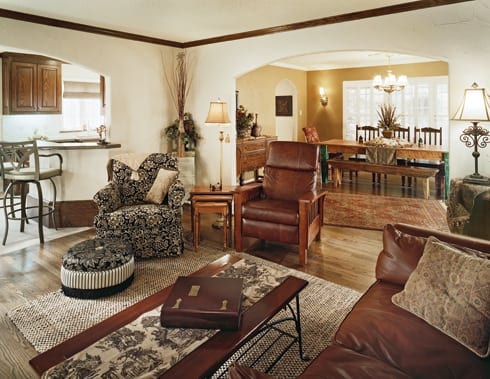 A Study in Superb Design 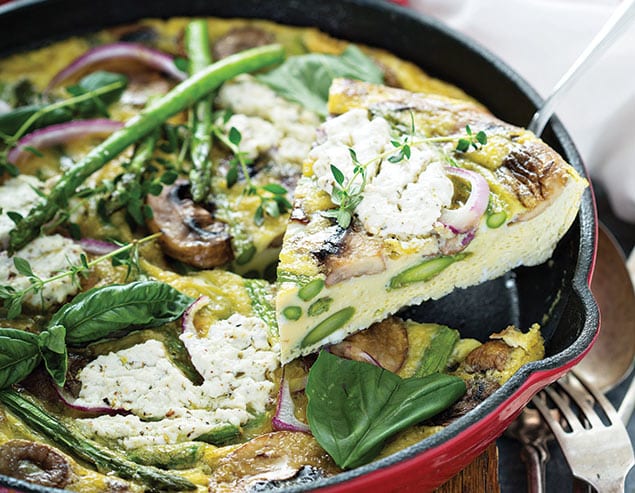 An Eggstravagant Family-Friendly Frittata in Under an Hour